Welcome back to Country Music Mama! I’m grabbing a cup of coffee and ready to share this road trip with you.

(see my About page )About

I promised you a back stage look into the life of country music artists. Here is my story of our trip to N. Carolina, Georgia, and the S. Carolina Peach Festival. You can read my story below and/or see a video post that Eli has about the event. I think you’ll enjoy it!

Thank you South Carolina Peach Festival for your hospitality despite the stormy weather!

Does it look easy to pull together a band to go to shows?

Well, sometimes it isn’t. This is one of those times where schedules weren’t meshing, details were like little gremlins and artists were having artist issues. Then the weather decided to become video for the Weather Channel.

Eli left with a couple band members for the nine hour drive to Franklin, N. Carolina where he played that night at Root &Barrel. Enthusiastic crowd and very nice folks took great care of the band! We got in around 1 am. Long Day!

Does it get better?

The next morning, Eli left early to do three radio interviews and pick up his brother, Raul, from the Atlanta airport. Raul, my oldest son, flew in from Ft. Worth, Tx.,to do the video for Eli’s show. At five  we headed down to Clayton, Georgia. He played a duo show with Anna Lee at the Clayton Marketplace’s new rooftop bar from 8-11pm.  Fun crowd! The rest of the band came in about 4am. to sleep for a few hours.

Why did Eli go to shows early before the Peach Festival?

At this stage we have to bunch as much as we can into a trip to make it cover gas and expenses. North Carolina, S. Carolina, Georgia, Florida, and Tennessee have been very enthusiastic about Eli’s music. His songs are being played regularly on the radio and fan base is building. These small shows give Eli a chance to introduce himself to new people and stop by to visit supporters.

The sky started falling early. Thunder rolled through the mountains as the band loaded their equipment into the truck and trailer. Three hours later we drove into the fairgrounds for the South Carolina Peach Festival in Gaffney. Merchants set up their booths and food trucks. A carnival was already waiting for riders. We met the two bands who had been chosen to open for Eli and his band. Sound check- everything  was ready to go. I settled in with a good book until we were ready to set up the merchandise tent..

Does Eli’s band hang out in their big, modern band coach, waiting to perform?

No! They go fishing! They keep rods and tackle packed up with their gear. A nice little pond was part of the fairgrounds. A break in the clouds and off they went. Besides, they don’t have a tour bus yet so they make the best of it! 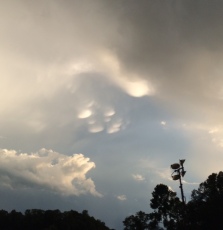 I started monitoring the weather. The radar showed vicious storms lined up, targeting us. Storms hit us dead on during the first few songs of the second band. 60mph. rain squalls hit the outdoor metal stage while lightning cracked overhead. It only took minutes for the cords and equipment to be under an inch or so of water and unsafe to be near. Bands scrambled to save their instruments. The show was called off. 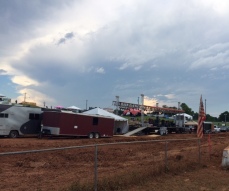 As the opening bands loaded their gear and headed out the gates, Eli noticed the crowd of disappointed fans and festival workers huddled under a tent on the hill. Grabbing acoustic guitars,  Eli, Kheagan and Anna, ran into the rain up to the tent. An impromptu concert broke out to show appreciation to these folks. And they really enjoyed his effort and music! It was a fun time instead of a drizzly defeat.

My next post will be an interview of a wonderfully supportive music mama. See you then!

You can subscribe to my blog here! Thank you!!!

I am the mother of a Country Music artist. Life behind the guitars, lights and microphones is a rich puzzle of experiences. I want to share that with you! I am an artist, writer and children's book illustrator. View all posts by Country Music Mama

This site uses Akismet to reduce spam. Learn how your comment data is processed.

4 Ways to Make a Difference With Your Music